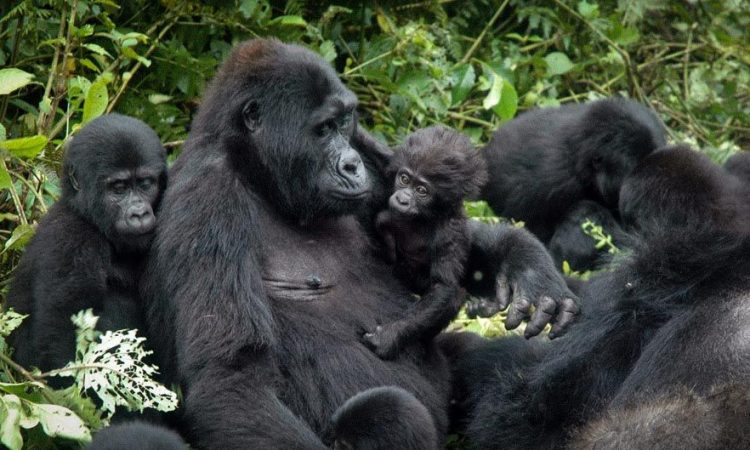 Busingye the dominating Silverback is fond of snatching females from other mountain gorilla groups to add to his own group and always protects his family from other wild Silverbacks no matter what it costs. This gorilla family was opened up for trekking in 2011. The other gorilla groups in the Rushaga sector of Bwindi impenetrable forest national park can be seen below;

Bweza mountain gorilla family was formed in 2012 when the Silverback Bweza broke off from the Mishaya gorilla family taking a way six members with him to start his own family. Mishaya group was part of the largest group habituated in Bwindi that is Nshongi family.

The Nshongi gorilla family first consisted of 37 members at the time of habituation, the name was derived from a river where they were first seen by trackers. This group was opened for tourism in 2009 though it split off in July 2010 with Mishaya taking some members to make his own family.

Mishaya gorilla family was formed in 2010 by the silverback Mishaya who broke off from Nshongi gorilla family, after sometime the Mishaya gorilla family split again when Bweza broke away to form his own gorilla family. Bwindi impenetrable forest national park is not only home to mountain gorillas, there are also several other primates in the park such as the black and white colobus monkeys, red tailed monkeys, blue monkey, olive baboons and so much more.