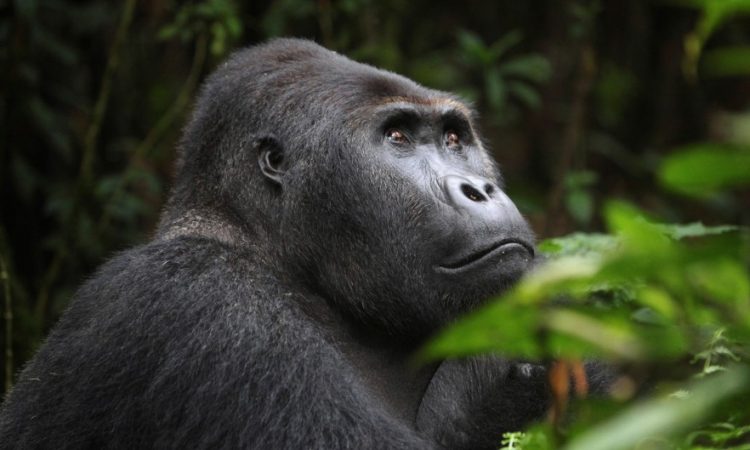 Tourists who trek gorilla will be given a period of one hour to observed this great apes,

Congo offers the lowest rates of gorilla permits than Uganda and Rwanda, they even have discounted low season rates of your s tourists on budget the best place to do gorilla trekking will be in Congo

Congo’s gorilla permits are more cheaper than permits in Uganda and Rwanda, a permit in Congo costs $450 and the permits are discounted during the low season from 15th march to 15 may then 15th October and 15th December the permits cost $200 for non residents, Congolese residents pay $150 and SADC national pay $200.

Below is Congo gorilla families habited for tourism purposes

Humba gorilla family was earlier dominated by a silverback Humba who broke off from his father’s group Rugendo and moved away with 9 individuals but he unfortunately fought with his brother Nyakamwe and the group split again living Humba with 6 members, the family roams between Gatovu and Bikenge areas.

Rugendo group was dominated by a silverback Rugendo who was unfortunately killed by rebels in 2001, Rugendo fathered many dominating silver backs now in Virunga national park. Senkwenkwe led the group after the death of his father but was also killed with five other gorillas by in known people. The group was later on led by Bukima

Nyakamwe gorilla family is dominated by a silver back Nyakamwe who broke off from Humba group after a fight. Humba group contains of eleven individuals.

Munyaga gorilla group was  at first headed by an adult female Nsekuye, the group was taken over by Munyaga who took advantage of no silver back, Munyaga silver back was a lone silver back later on Munyaga lost his females to Kabirizi group an disappeared and Mawazo took over the group leadership.

Bageni gorilla group is dominated by Bageni a silverback who split up from the  fathers group of Kabirizi, the group resides in Bukima and Gatovu areas of Virunga composed of 26 individuals. Bageni moved with his mother Mapendo and his brothers.

Mapuwa group was formed after the silverback Mapuwa rebelled from his father’s group Rugendo to form his own group; the group resides in Jombo area of Virunga national park, Mapuwa silver back now has 22 individuals including two females he grabbed from Lulengo group.

The Lulengo gorilla family was at first led by a dominant silver back Rugabo who was shot dead with two other males, Mvuyekure the current silver back dominating Mapuwa group was also carried away by poachers to sell off in the neighboring Uganda by he was rescues when the poachers were captured the group is now led by Lulengo with 9 members.

The Kabiroxo gorilla group is dominated by Kabirizi, the group was at first led by a silver back Zunguruka who was succeeded by Ndugutse his son until he was killed by a crossfire between Congo army and Rwanda rebels, Buhanga the son of Ndugutse succeeded him until he was rivaled by his brother Karateka and Karateka was left alone silver back.

Later on Buhanga fought with alone silver back Kabirizi who left him wounded and he died the female Nseku took over the grouo until it was graves by a lone silver back Muntanga but the group was again graves from Munyaga by Kabirizi who’s now the current group leader.