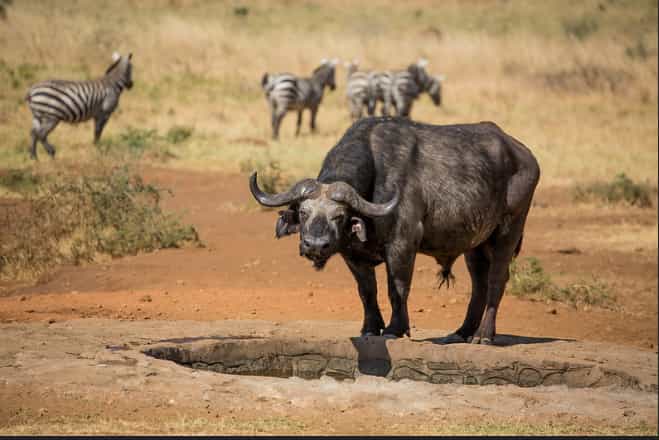 Kidepo has quite a number  of activities that travelers can engage in when they visit the park including;

Day game drive, Kidepo valley national park is a popular destination for game viewing which is done on game drives with a pop-up roof Uganda safari vehicle. Game drives can either be done early in the morning at 6am or late in the evening at 4pm when the animals are active, game drives in Kidepo valley national park are done in the open savannah vegetation, grassland vegetation, Narus valley among others which harbour different animal species such as Antelopes, Zebras, Beisa Oryx, Monkeys, Bushbucks, Bush duikers, Waterbucks, Elephants, Bush pigs, Warthogs, Buffaloes, Giraffes among others.

Night game drives, Kidepo national park is one of the national parks that offer visitors on a safari an opportunity to view nocturnal animals and those which they might have missed during the day game drive. Night game drives in Kidepo national park are done after dinner with a guide and spotlight torches for clear views of the nocturnal animals for example the predators including the lions, leopards, cheetahs, hunting dogs, bush babies, bat-eared fox, white tailed mongoose, small cats, spotted hyenas among others hence making your safari memorable.

Nature walk/ hiking, this is an activity where visitors move on foot with an armed guide within the open flat savannah plains and grasslands in Kidepo national park, walks into the Lamoj hills where they will spot wildlife species, hiking to Kanangorok hot springs a natural spa in kidepo wilderness and the hot springs are usually occupied by local people in that the waters are referred to have healing powers, walk through the Kidepo valley sands during the dry season when Kidepo river has dried up.

Hiking in Kidepo valleys national is also done in Namamukyeny valley which is a quiet, lonely place with many bird species hence good for birding and relaxation, Hiking at Morungole Mountains to visit the IK people which is one of the smallest ethnic groups in Uganda with a unique culture nature walks in the Narus valley to see animals drinking water among others. Hiking is an adventurous and exciting activity in Kidepo valley national park in that visitors will be able to view different bird species and animals at a close range and also relax your mind.

Bird watching, Kidepo valley national park harbours 470 bird species of which 14 species are endemic to Kidepo and the Karamoja region hence known as a birders paradise for bird lovers.  Bird watching activity usually starts in the morning at Apoka rest camp and also drive to Narus River, Namamukweny valley among others which are great birding spots in Kidepo national park where visitors will be able to view rare bird species such as ostriches which is the heaviest and is only found in Kidepo and Kori bird which is the largest and other species such as Yellow-billed shrike, Silver birds, Broad-tailed Warblers, Black coucal, Crimson ramped waxbill, Verreaux’s eagle, Yellow-billed hornbill, Egyptian vulture, Kori bustard, Pygmy Falcon, Karamoja Apalis, Jackson’s hornbill, African moustached among others.

Cultural encounters, this is an activity where the visitors visit the neighbouring villages so as to learn their lifestyles and way of life, villages include Karamojong village, this is an interesting village with good people, the Karamojong are warrior nomads who rare a lot of cattle and also participate in subsistence farming. They live in an arid region where they walk long distances to get water and the place sometimes gets floods during the rainy season and drought during the dry season hence making them migrate with their cattle in search of water and pasture during the dry seasons and construct temporary structures wherever they go. During your interaction with the Karamojong you will see their traditional homesteads similar to those of the Masaai in Kenya and Tanzania, instruments such as knives, stools, arrows, spears, see their unique dress code, beads, visit art and craft shops at the entrance of the park, enjoy entertainments from the groups such as Nyangia ethnic group, Laka Karaka, Emuya of Naporre which entertains visitors through dance, music, drama performances among others.

IK people, these inhabit on the slopes of Mount Morungole hence takes 8 hours to climb the mountain and visit the IK tribe which is one of the original tribes in the northeastern part of Kidepo valley national park. The IK tribe is also interesting and unique just like the Karamojong tribe hence offering you with interesting experiences of the history, cultural performances, traditional dress code, traditional dishes among others on your safari in Uganda.

Also, the entrance fees to Kidepo National Park are like any other national Park in Uganda since it is also under the Uganda Wildlife Authority.

Kidepo valley national park is one of the best virgin places in Uganda which harbours endemic wildlife species such as the Cheetah, Caracal, Mountain Reedbuck, Kudu, and rare bird species such as the Ostrich and Kori Bustard which can only be sighted in Kidepo national park with unique tribes hence offering wonderful experiences with lifetime memories on your safari in Uganda.

Safaris to Kidepo National Park as described are very interesting and should be one of the national parks in Uganda that you should visit.