Mount Gahinga is also sometimes known ad mount Mgahinga situated in the boarder between Uganda and Rwanda, mount Gahinga is one if the eight ranges of the Virunga massif volcanoes. The mountain derives its name from a local word to mean “small pile of stones “ . 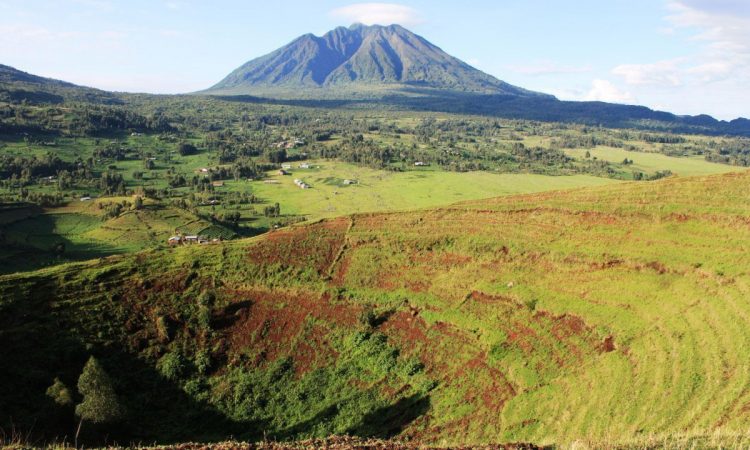 The main vegetation on the mountain is bamboo then Afro montane forests habituating the endangered mountain gorillas and golden monkeys. The volcano is about 100 years making it one if the youngest in the Virunga massif

The mountain rises at an elevation of 3,474 meters above sea level between mount Sabinyo and mount Muhabura, the caldera on the mountain is swampy and 180 meters wide. Black fronted duikers are often seen at the top of mount Gahinga and occasionally bush bucks.

Apart from just trekking to the top of mount Gahinga tourists can do a lot of other activities such as?

Golden monkey trekking can only be done in the Virunga ranges in the whole world with Mgahinga having the densest population of this beautiful unique monkeys, the number is estimated to be 3000-4000 according to the 2003 survey tourists can also do a four hour golden monkey habituation experience.

Golden monkeys are also a lot more easy to trek compared to gorilla trekking because they don’t  move and build different nests daily so they can easily be found. Golden monkey trekking starts every at 8:00 am.

Gorilla trekking at Mgahinga national park starts at t8:00 at the Ntebeko gate entrance and maximum of eight people is allowed to view a particular group of mountain gorillas daily and one hour of observation is given to tourists from the time they fond the great apes. Gorilla permits in Uganda cost $650

The Virunga conservation area contains about 250 bird species and of which 115 can be found at Mount Mgahinga national park, the best time to do birding here is from April to May and October to November. Some of the bird species in the park include; white necked raven, pin tailed whydah, double collared sun bird, paradise fly catcher, fire finch stonechat, olive woodpecker and Ruwenzori nightjar to mention a few.

Tourists can get an authentic experience of the traditional Batwa people believed to have lived in the forest for over 500,000 years until they were pushed away, the Batwa trail was put in place in order to restore the dignity and hope of the ancient Batwa people. You can contribute to people’s livelihoods by engaging on this activity.

You can learn about the history of the Batwa people, get entertained with local traditional dances and perhaps buy some hand made crafts to take back home for remembrance