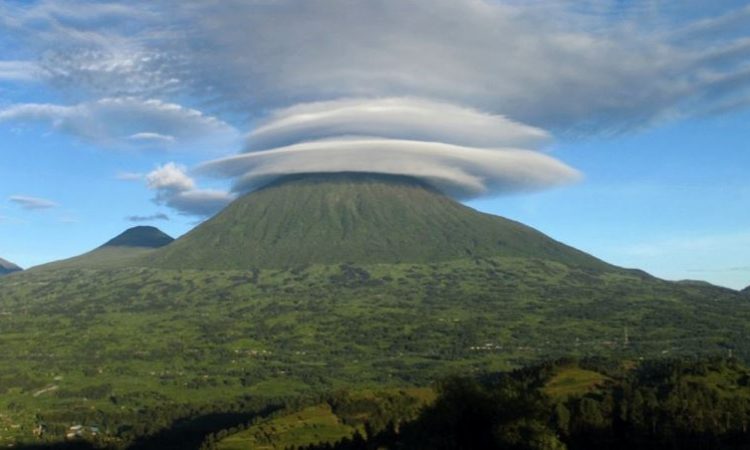 Volcanoes National Park has over the years gained fame due to the fact that it is one of only three habitats of the large, hairy and strong Mountain Gorillas, in the world. It is because of this reason that Gorilla Trekking Safaris to this destination, are becoming a tremendously fast rising tourism activity in Rwanda. 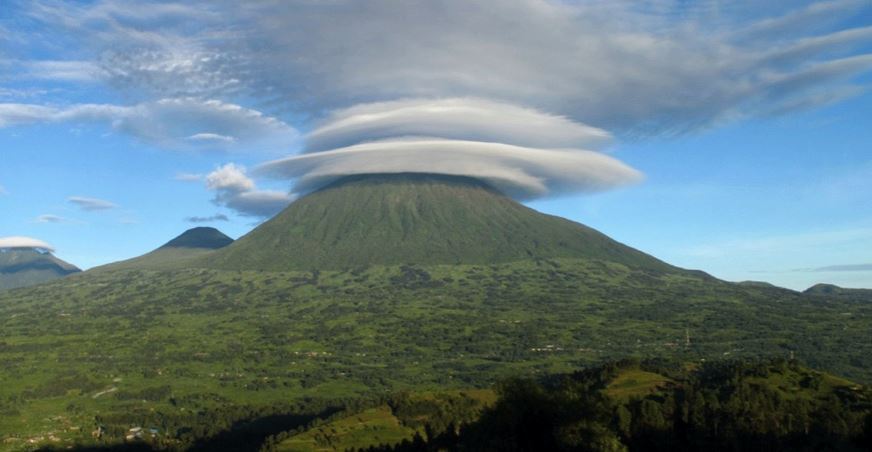 Volcanoes National Park borders Virunga National Park in DRC and Mgahinga Gorilla National Park in Uganda. It encompasses 5 of the 8 volcanoes of the Virunga volcano region and these include; Mount Karisimbi, Mount Sabyinyo, Mount Gahinga, Mount Muhabura and Mount Bisoke.

In 1929, Volcanoes National Park was extended from Rwanda into Congo. The national park was originally called Albert National Park after King Albert 1. It was managed and run by the Belgian Colonialist government at that time.

Later in the 1960s, Volcanoes National Park was divided between Rwanda and the DRC following their gain to Independence. This greatly reduced the park to half size and hence giving rise to the birth of Virunga National Park in the Democratic Republic of Congo.

Volcanoes National Park covers 160 square kilometers of rain forest and bamboo. It has 178 bird species of which 13 species and 16 sub species are found in the Virunga Conservation Area and Rwenzori Mountains respectively.

Volcanoes National Park acted as a base for the American primatologist and conservationist Dian Fossey in 1967. Her scientific research in the park dates back as far as 1966 when she started studying mountain gorilla groups within the park. After her murder, she was buried at a grave site located within the park.

Volcanoes National Park is home to quite a number of mammal species such as; bushbucks, vervet and white and black colobus monkeys, spotted hyenas, forest elephants, buffaloes and giant hogs amongst others.

Volcanoes National Park later became a battle front for the Rwanda civil war in the early 1990s. The genocide war not only greatly affected the lives of people living in Rwanda, but also reduced tourism activities in the area up until 1999.

However in 2005, the Rwandan Government introduced the baby naming ceremony for baby gorillas called ‘Kwita Iziina’. This was done in a bid to revamp tourism and conservation activities in Volcanoes National Park. The ceremony for naming baby gorillas happens annually and involves the participation of both the local community and tourists as well.

Volcanoes National Park has its Headquarters based in Kinigi which is a small village located in the town of Musanze, which was formerly called Ruhengeri. The park’s headquarters in Kinigi is where trekking permits are issued and also briefing of tourists visiting the national park. It is important to note that tourists intending to carryout gorilla or golden monkey trekking in the park should make booking for their trekking permits at least 6 months in advance. This is to avoid any inconveniences especially during the peak season between June and September to guarantee availability of permits. Gorilla trekking permits in Rwanda cost USD 1500 and USD 600 in Uganda.\ 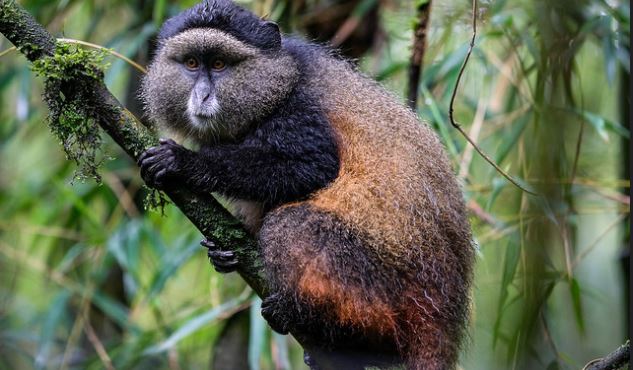 There are a number of fun, adventurous and memorable activities that tourists can engage in and these include;

Gorilla Trekking: Gorilla Trekking activities in Parc National des Volcans make one of the highlights of a Rwanda safari. Tourists visiting the national park can track mountain gorillas at a fee of USD 1500. Gorilla trekking can be done all year round depending on when tourists book; however, the best time to trek gorillas is between June and September when its peak season. Gorilla trekking permits must be acquired by all tourists who want to trek and trekking can only be done by adults aged 18 and above. Tracking activities begin at 7 am at the park’s headquarters in Kinigi, hence visitors are advised to keep time. Please see link Gorilla trekking in volcanoes national park for more information on this activity. 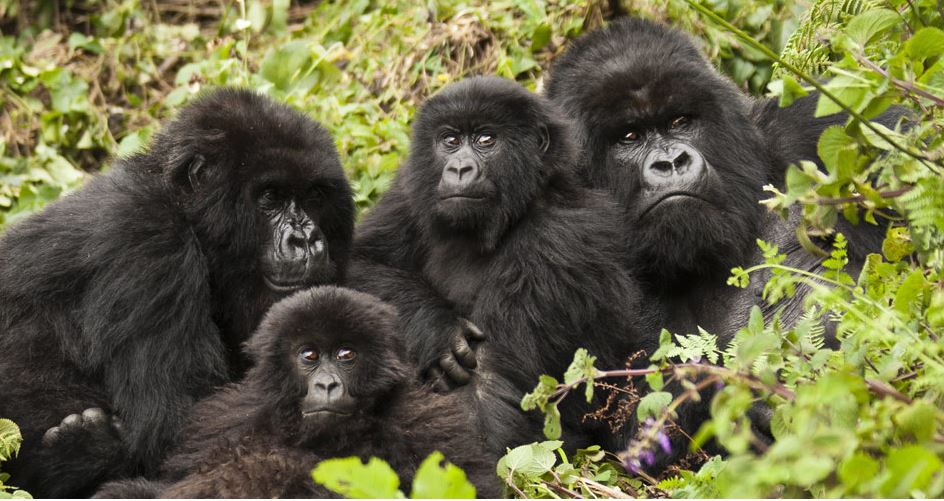 Golden Monkey Trekking:  Trekking golden monkeys in Volcanoes National Park is an exciting and adventurous experience. The national park has two habituated groups of Golden monkeys that tourists can visit. Both these groups comprise 80 members and tracking activities also commence at 7am. Permits for golden monkey trekking cost USD 100 and this price cuts across Rwanda and Uganda.

Hiking Mountains Karisimbi and Bisoke: This activity consists of hiking expeditions on either Mountains Karisimbi, Bisoke, Muhabura or Gahinga. Tourists embarking on a hiking trip on Mount Karisimbi can enjoy pleasurable sights like bird, wildlife like mountain gorillas and forest elephants, and insect species. While tourists hiking mount Bisoke can view attractions such the Crater Lake on the mountain’s summit. Hiking activities in Volcanoes national park cost between USD 75- 100 dollars per person.

Hike to Dian Fossey Grave Site: Tourists visiting Volcanoes National Park can enjoy a hike to Dian Fossey’s tomb and also pay a visit to Karisoke Research Centre; both located within the park. Please do refer to our article on Dian Fossey for more information. This activity costs USD 100 dollars per person.

Caving: While on a tour of Volcanoes National Park in Rwanda, tourists can also pay a fee of USD to go on a hike to Musanze Caves that are located within the national park. These caves were created as a result of volcanic eruption about 65 million years ago.

Musanze caves were opened to the general public and tourists in 2013 by the Rwanda Development Board. The lushly and green rocked caves run for about 2km and are home to cave bats. Tourists visiting the caves are provided with equipment like; gloves, knee caps, boots, face mask, helmet and head cap.

Cultural tour: One cannot visit Volcanoes National Park without visiting the nearby local communities. Tourist on a cultural tour can pay a visit to Ibyiwacu community village where you can interact with the local people, be entertained by the local intore dance group and take a walk around the village.

Guests are also take through the cultural history of the village as well as the process of making local banana brew.

Volcanoes National Park has a number of attractions that tourist can see and these include;

Mountain Gorillas: Volcanoes National Park is home to half of the world’s endangered species of mountain gorillas. These unique and yet intriguing animal species, gained a lot of popularity after the death of scientist and conservationist Dian Fossey in 1985. She carried out a comprehensive scientific study on mountain gorilla families in the national park.

Many tourists travel from all parts of the world to Volcanoes National Park in order to have an exciting experience of seeing the habituated mountain gorillas.

Dian Fossey Grave Site: Dian Fossey was an American primatologist and conservationist whose scientific study on mountain gorillas contributed a lot towards our understanding of these species and need for their conservation. Fossey was found dead in her camp in 1985 in Rwanda. She was buried at a grave site near her favorite gorilla called ‘Digit’. A tour to Volcanoes National Park is not complete without a visit to Dian Fossey’s tomb.

Mount Karisimbi: Mount Karisimbi is a stratovolcano which is the highest of all eight volcanoes in the Virunga volcanic realm. It is 4507 meters above sea-level and the 5th highest mountain on the African continent. The mountain has numerous numbers of bird and plant species and is also home to some groups of mountain gorillas.

Hiking activities on Mount Karisimbi can be booked at Volcanoes National Park. While hiking on the mount, tourists can sight a number of bird and plant species and one a lucky day, hikers may be graced with the presence of mountain gorillas while on your hike.

Mount Bisoke: Mount Bisoke is a dormant volcano and it is also one of the eight volcanic mountains in the Virunga volcano field. The last volcanic eruption on the mountain took place in 1957.

The mountain sits at the border of Rwanda and DRC with its summit in Rwanda. One of the unique attractions on Mount Bisoke is the beautiful Crater Lake at its summit. Tourists visiting the national park can engage in adventure thrilling hikes to the Crater Lake on the mountain.

There are other attractions in Volcanoes national park that might be of interest to tourists visiting the park. These include; the twin lakes (Ruhondo and Burera), golden monkeys and Musanze caves.

All the above lodging facilities offer budget, mid-range and luxury accommodation options for any tourist visiting Volcanoes national park. These facilities also offer their clients a wide range of services such as; free Wi-Fi, exquisite restaurant/dining meals, a well-stocked bar and lounge area for guests, free ample packing, spa treatments, gym and stunning views of lakes like Burera, Ruhondo and Kivu among others.

HOW TO GET TO VOLCANOES NATIONAL PARK

Volcanoes National Park can be accessed by road from Gisenyi town or Kigali City. All trips to the national park begin at Kigali International Airport.  Visitors will then have to embark on a 2 hours’ drive to the park’s headquarters in Kinigi. The national park’s close proximity to Kigali City makes it a convenient destination for short tours, as well as gorilla trekking safaris in Rwanda.

Volcanoes National Park in Rwanda has a wide range of activities that it can offer to its visitors; and thus, that goes without saying that a Rwanda safari/ tour is not complete without a trip to this national park.