Africa’s big five animals : The word ‘Big Five’ is a common slogan and tourism marketing phrase that is used by majority of tour operators in Africa. Most tourists visiting Africa on a wildlife safari usually embark on game drives to see any of the Big Five animals. In case you are wondering what the ‘Big Five’ animals in Africa are, this article should be able to explain it all in detail.

What are the Big Five animals in Africa?

The Big Five animals in Africa consist of; the lion, the leopard, the African elephant, rhino and the Cape buffalo. The African continent has been rich blessed with a wide variety of wildlife animals, and it is no wonder that most tourists want to visit this lovely continent and explore its rich, beautiful and vast savannah lands, wildlife and diverse cultures. The Big Five animals live in the wild in most sub-Saharan African countries.

A safari in Africa is not complete without a tour of the Big Five animals. Visitors who wish to see the big five animals in the wild, will have to embark of a guided game drive to any of the national parks in sub-Saharan Africa.

Why are they called the Big Five?

The word ‘Big Five’ was derived from big game hunters in Africa, who found great difficulty in hunting the animals on foot. Therefore, it goes without saying that, they are called the big five because they are the five most difficult animals in Africa to hunt on foot. 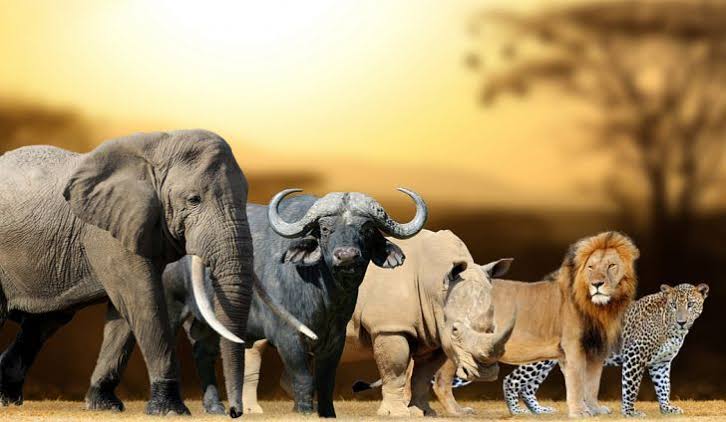 Where can one see the Big Five animals in Africa?

The best places in Africa where  visitors can see the Big Five animals in the wild include; South Africa, Namibia, Zambia, Zimbabwe, Kenya, Uganda, Tanzania, Malawi, Ethiopia, Botswana and Rwanda. However, visitors might also see some of the big five animals on a visit to the Democratic Republic of Congo.

Brief notes on the Big Five animals in Africa.

Visitors on a wildlife tour to any national park in sub-Saharan Africa will be able to see most of the Big Five animals while on a game drive. Most of the national parks in sub-Saharan African countries offer their visitors both morning and evening guided game drives; with the evening/night game drives offering tourists higher chances of seeing nocturnal animals such as lions, leopards, bush babies, serval cats and others.

For those visitors with a lot of interest in the Big Five animals, here are a few notes that you might find interesting about each species of the big five;

African elephants are difficult to hunt because they are capable of hiding behind tall grass, and can also charge in the sight of danger. For this reason, most African game hunters have also referred to the species as one of the Big Five animals. One of the major threats to the African elephants is man, who is continuously hunting down the species for their horns which are on high demand on the Asian black market. As such, the African elephant is listed as a vulnerable species under the IUCN Red List.

Lions are usually referred to as the ‘King of the Jungle.’ The lion is the second largest cat after the tiger. Lions can be seen living in the wild, savannah grasslands in Africa. Visitors can identify these large cats by their brown, short fur, wispy tail and heavy mane in males. Male lions in southern Africa can weigh between 187-225kg, while those in East Africa can weigh up to 175kg. Female lions in southern Africa weigh between 118-144kg, while females in East Africa can weigh up to 120kg.

Lions spend most of their time resting. These cat species can sleep for about 20 hours a day. They are carnivorous animals, and the best part of their diet comprises of animals such as; zebras, antelopes, impala, topi, buffalos and wildebeest among others. Female lions do most the hunting in the pride while the males mostly protect and lead the pride.

The best places for tourists to spot lions while on a safari is in Kgalagadi Transfrontier Park in South Africa, Maasai Mara National Park in Kenya, Ngorongoro Conservation Area in Tanzania and Okavango Delta in Botswana. Visitors can also see lions in Akagera National Park in Rwanda and Queen Elizabeth National Park in Uganda, which is famous for its tree climbing lions.

Lions are largely sought after by hunters as hunting trophies, and the adrenalin rush felt while hunting the species. Lion populations in Africa are declining at a fast rate because of the continuous poaching of the species. The lion species is also listed as vulnerable under the IUCN Red List.

The African Cape Buffalo: The African Cape buffalo is listed as one the Big Five because of the grave danger involved in hunting the species. These animals are known to have a bad temper, and easily charge at the slightest notice of danger. A male buffalo can weigh up to 1,000kg and females weighing up to 678kg.

The African Leopard: The African leopard is the shyest animal of all the Big Five animals in Africa. Visitors on a safari game drive may find it spot a leopard because it spends most of its time in isolation. Leopards are mostly active during the night, between sunset and sunrise. Visitors can identify African leopard by its large body and brown-spotted fur. Leopards spend most of their time hidden up in trees, where they can spot their prey easily and also hide prey from other scavengers like hyenas, lions and wild dogs.

Leopards are very fast animals, which helps them a lot when it comes to hunting prey. They can run at a speed of over 56 kilometers per hour, and can jump over 10 feet into the air. The biggest threat to their existence is humans, who kill the species for their skin and to prevent them from killing livestock. According to the IUCN Red List, the African leopard is listed among vulnerable species.

The African Rhino: Tourists visiting Africa can see both white and black rhinoceros on a safari. There is not much of a difference between the two species of rhinos, and hence visitors may find it difficult to tell the two apart. While black rhinos have their lips pointed and covetous, the lips of white rhinos are relatively flat and wide.

The African rhino is known for having a bad temper, and easily charges at its opponent when it detects danger. It for this precise reason that hunters in the past regarded the African rhino as hard animal to hunt.

The African rhino is a herbivorous animal and the biggest part of its diet consists of leafy plants, branches, shoots, fruits and thorny wood bushed. The species can weigh from 800-1,400kg; with extremely large male black rhinos capable of weighing up to 2,896kg.

Visitors travelling to Uganda can see rhinoceros only in Ziwa Rhino Sanctuary. Rwanda also recently acquired 18 black eastern rhinos from South Africa in May 2017, and an additional five rhinos on 24th June 2019 from the Czech Republic. The translocation of the species to Akagera National Park in Rwanda, comes after 10 years of their absence in the national park.

The Big Five animals in Africa are a MUST see for any visitor travelling to this continent. Visitors who are interested in seeing the Big Five on a game drive should ensure that your safari guide knows exactly where to locate the animals.

Do get in touch with us for any inquiries that you may have about Africa’s Big Five; and don’t forget to contact for the best offers of Big Five safaris.